Administration – Office of the Mayor & Board of Trustees
Contact: Village Office
Address:

Mayor’s Duties and Responsibilities: The Mayor is elected to office for a four-year term and is the Chief Executive Officer of the Village. As an elected official, the Mayor has several statutory powers under NYS Village Law sub-section 4-400. The Mayor typically presides at meetings of the Board of Trustees, and in all instances, the Mayor’s vote is counted as one vote and is equal to a Trustee vote. In the case of a tie, the Mayor is mandated by law to vote. Additionally, the Mayor executes contracts, deeds, and other documents on behalf of the Village as authorized by the board. The Mayor of a village has no veto power over legislative action of the board. An essential responsibility of the Mayor is the ability to intervene in all actions at the discretion of the board. When and where deemed necessary or appropriate to protect the rights of the Village and its residents/inhabitants. The enforcement of all laws, rules, and regulations falls to the Mayor’s responsibility. This responsibility includes seeing all violations through to prosecution. Like many other villages, Fonda’s Mayor has delegated some of these responsibilities to the Code Enforcement Officer and other internal department heads. The Mayor has the power to declare local emergencies and to engage the resources of the Village when necessary to mitigate the loss of life or property during hazardous or emergency situations.

Village Board of Trustees

Village of Fonda Board of Trustees

Board of Trustees Duties and Responsibilities: and Comprised of the Mayor and four Trustees, each elected to a four-year term of office. Terms of office are staggered such that in any given year, two trustee positions are up for election, except for the Mayor. The Trustees of the Village Board manage all village property and finances, oversee the government of the Village, its management and business, protection of the safety, health, comfort, and general welfare of village residents. Trustees attend all board meetings and vote on matters before the board. The Village Clerk manages all correspondence and requests for the Board of Trustees. The Clerk forwards all communication to the Board. To have a matter added to the Board of Trustees’ agenda, you must write to the Clerk for approval by the Mayor. 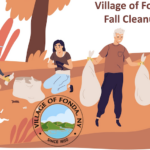