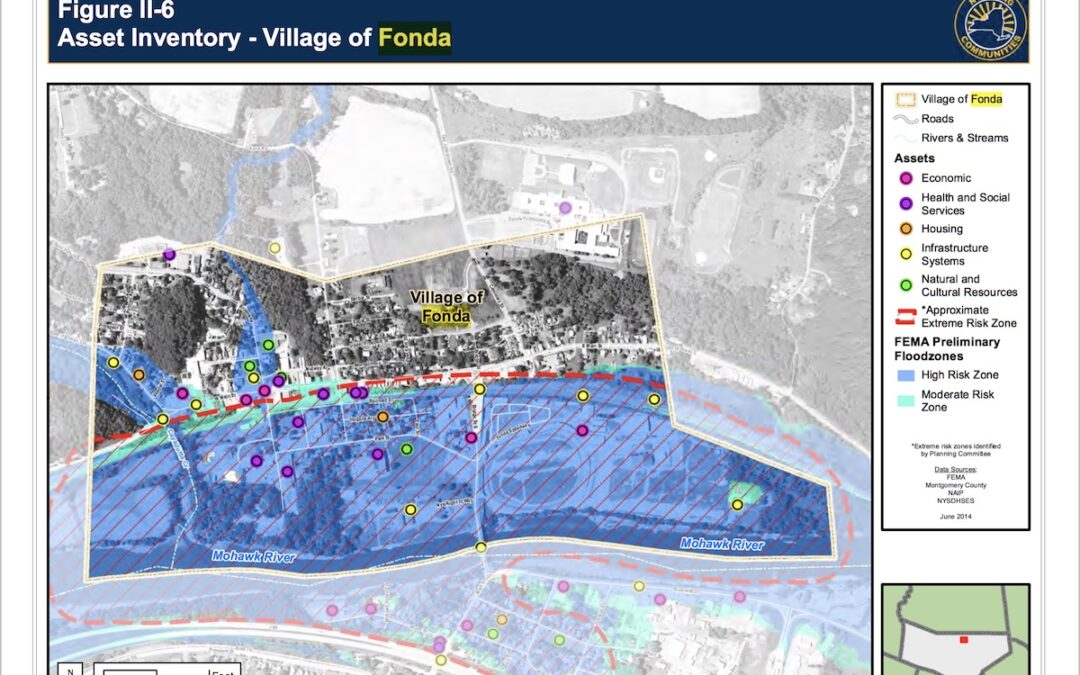 As of 10:00 PM, July 23, 2021, I have rescinded the State of Emergency for the Village of Fonda. The Emergency mitigation work by Village and County forces continues in the “Unnamed Creek” East of Broadway, and that is the source for the flooding conditions we have experienced. 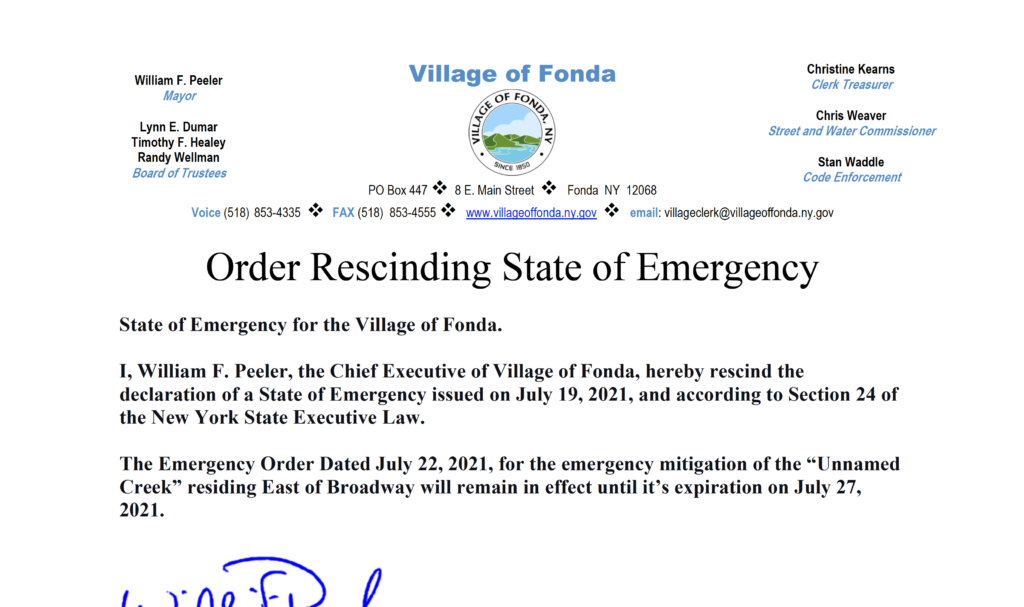 As with any disaster or emergency, there is much speculation surrounding the flash flood on July 19 and again on July 23. Here is what we know:

On July 19, 2021, we experienced an estimated 4″ of rainfall in a short period. The rain experienced added to the already saturated grounds. The storm approached the Village from the North. This fact is essential because runoff water comes from North of the Village filling the creek that flooded. In addition to the runoff, the rainstorm remained above the Village for an extended time rather than passing through.

The flooding caused damage to approximately 16 properties and homes. The Town of Mohawk Fire Department, with assistance from other community fire departments, pumped water from several basements that caused damage to gas lines, furnaces, hot water tanks, and electrical panels. With the assistance of National Grid and private vendors, homeowners have restored some of their services while some are waiting for replacement appliances. We have a shortage of appliances and materials, such as furnaces, due to the ongoing struggles of manufacturing and distribution.

To my knowledge, all residents have returned to their homes or remained in their homes.

Flood debris affected Broadway and Main Street, creating emergency cleanup by the many municipalities, state agencies, and volunteers. At approximately 4:30 AM, we cleared the roadways on Tuesday, July 20, 2021. Workers returned some hours later to continue removing debris and vacuuming the stormwater system.

Upon inspection of (Broadway) Unnamed Creek, we discovered that the flash flood washed soil and trees into the creek, reducing the average 5-6 foot depth to no depth in some areas and shallow depths in others. We later discovered that a hill had also washed out within the Town of Mohawk portion of the creek, causing additional creek filling. These conditions continued threats to many of the homes already flooded. On July 22, I ordered the Street and Water Commissioner to remove the debris from the Creek under Executive Order and the Declared State of Emergency. After consulting with the Montgomery County Engineering Village Street & Water Commissioner and the Town of Mohawk, Highway Supervisor work began immediately by the Village crew. On July 23, with the assistance of the Montgomery County Highway Department and the Village of Fonda DPW, more extensive scale removal of debris was removed to remedy the anticipated water from coming over the creek edge from Court Street down Broadway. 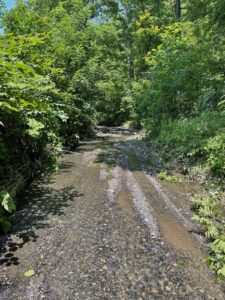 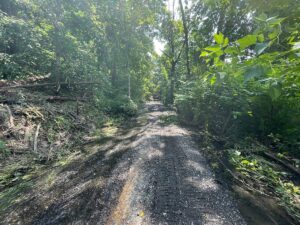 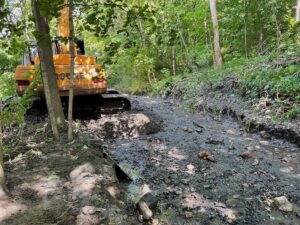 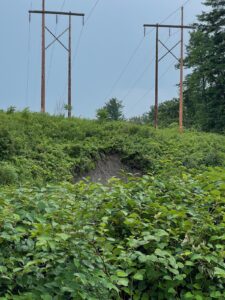 In addition to the creek’s natural and immediate deterioration, we found numerous debris block the stream, including improperly disposed of appliances such as stoves and clothes washers—unapproved bridges built in the backyard of homes.

On July 23, 2021, we experienced another heavy rainfall that caused further water flow in the creek that overwhelmed the undersized culvert that travels under two homes and the Catholic Church. Because of the emergency mitigation efforts, the water spilled over in one area onto Broadway rather than into all the homes on Broadway and Court Street. Due to the rapid response of crews and the discontinued rain, the flooding was brief, and cleanup was very swift. 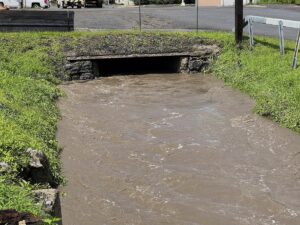 We are not out of pending threats completely. With an unknown amount of rainfall heading into the Village overnight Saturday, July 24, and continued rainfall on Sunday, July 25, we may experience additional issues. The report I received today from Montgomery County Emergency Management and the National Weather Service indicates the rainfall expected is moderate with a quarter to half an inch of rain. As you know, we may not become complacent as soil saturation is high. 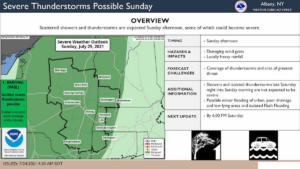 If you witness flooding or rising water, contact the Montgomery County Emergency Dispatch at 518.853.5500, or if an imminent threat to life or property, call 911.

The history of this creek dates back many years, remembering floods about 45+ years ago. The most recent flooding is memorable to many during the numerous storms in recent years. The creek is not owned by the Village government but is owned by the individual property owners.

The issues with the creek span across multiple jurisdictions, including the Village of Fonda, the Town of Mohawk, and potentially the Town of Johnstown.

In approximately 2014, Montgomery County included the Village of Fonda and this stream in an application for assistance from a program called “NY Rising,” where the Governor awarded $50,000 for engineering mitigation construction for this steam and $250,000 for initial implementation. Although awarded, the Village of Fonda never received actual money. I have been on the telephone with Congressman Tonko’s Office, Assembly Member Santabarbara’s office, and our Governor Representative; all have promised to assist in locating this funding. 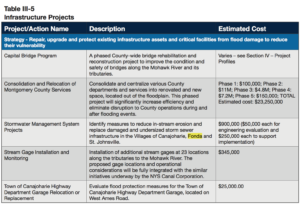 In speaking with engineers and other experts, I feel there are several mitigation steps needed and potentially included:

The enlarging of the underground culvert from Broadway to the Library continues to the Mohawk River. 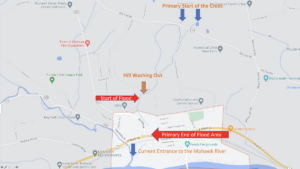 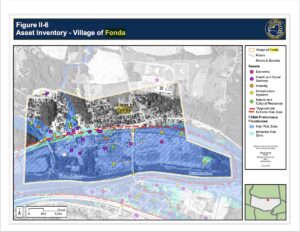 Additional assistance includes coordination of volunteers to assist with property cleanup for affected properties known. We hope to have volunteers start the cleanup process Tuesday. If you would like to volunteer, email villageclerk@villageoffonda.ny.gov with your contact information and availabilities to assist.

I hope this is the end of our struggles with the relentless rain and the damages brought by the flooding, but only time will tell.

With the assistance of our County Emergency Management Director Sager and the National Weather reporting, we will continue to monitor weather conditions and take whatever steps we can to prevent further issues. I will continue my communication with other public officials and seek whatever assistance we can receive. 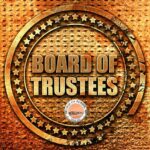